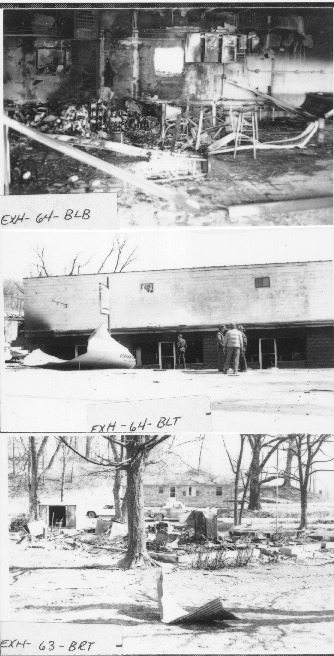 By the afternoon of the 24th, the temperature in the area had risen to the mid-50s, thanks mainly to clear skies and a lot of sunshine.  About 20 minutes before the offloading process was to begin, another test was accomplished using gas detection equipment.  These tests again revealed no apparent leaks of product from either tank.

The offloading crew was in the process of moving its equipment into place to begin the process.  On the scene were the Waverly Police Chief, the Waverly Fire Chief and a fire crew, and two members of the TOCD Hazardous Materials Team, John White and Mark Belyew.

At about 2:58 PM, vapor was observed leaking from the tank car.  Before anyone could react, an explosion (BLEVE - Boiling Liquid Expanding Vapor Explosion) occurred.  The explosion and resulting fires immediately killed 6 people, including the Waverly Fire Chief, and damaged or disabled much of the on-scene firefighting capability.

At 2:59 PM, a seriously injured John White contacted the TOCD office via radio and reported that an explosion had just occurred, and that Mark Belyew was missing.

The explosion propelled debris from the car in several different directions, including one head-end piece that was launched over 330 feet away, landing in front of a house.  People in the area reported hearing and feeling the explosion several blocks away.  Several major buildings in the downtown Waverly area were engulfed in flames, as were vehicles, people and other rail cars in the area.  The second tank car was near the flames but did not detonate.