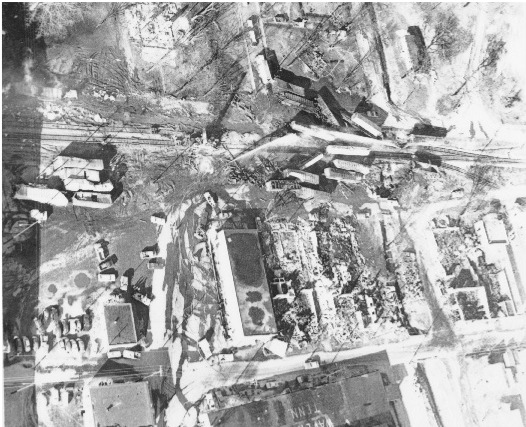 At about 10:30 PM on February 22, 1978, 24 cars of a Louisville and Northern Railroad train headed from Nashville to Memphis derailed in the small town of Waverly, the county seat of Humphreys County which is located about 60 miles west of Nashville along Interstate 40.  The town had a population of about 5,000 people.  The derailment involved 24 of the train's 92 cars, and occurred right in the center of the downtown area.

The initial response to the derailment was handled by the Waverly Fire and Police Departments.  After determining that hazardous materials were involved, namely LPG, an examination was made of the cars and no leaks were found. The initial inspection was accomplished without the aid of gas detection devices, and relied solely on the sensory abilities of the personnel involved.  The fire crews also assumed (incorrectly) that the car was a double-wall tank car.

Despite this, the decision was made to evacuate a nearby house and custodial care unit.  The fire chief instructed the city's dispatcher to notify Civil Defense the following morning.  TOCD was notified of the accident early in the morning of the 23rd, but was told there were no hazmats involved.

At 5:10 on the morning of February 23, TOCD was notified that there were indeed hazmats involved and TOCD dispatched a state hazmat team, led by then West Region Director Ron Collins.  At about 6:30 AM, the state team arrived and concurred with the local officials decision (already implemented) to set up master streams on the tanks to keep them cool.  Additional evacuations were ordered for a 1/4 mile radius, and electrical and natural gas service was shut off to the area.

L&N crews, meanwhile, began the process of clearing the debris and reopening the tracks.  One of the derailed LPG cars was partially covered by the other cars, and crews set about removing them.  Once this had been accomplished, a cable sling was placed around one end of car #UTLX83013 (the one that would eventually explode), and one end of it was relocated approximately 12 feet east to remove it from the tracks.  All relocations were completed by 2:15 PM on Feb. 23rd.

The L&N crew continued the process of removing derailed cars from the tracks and the line was reopened to limited traffic at about 8:00 PM that evening.  L&N had requested a team to respond to off-load the LPG from the derailed cars, and at approximately 1:00 PM the next day (the 24th), a semi-trailer and tanker truck arrived.  A supervisor that was familiar with the handling of LPG headed the crew.  The crew went to lunch and was to begin the removal process when they returned.

Temperatures had been in the 20s and had remained there throughout much of this time, and there was approximately 1/2 inch of snow on the ground.