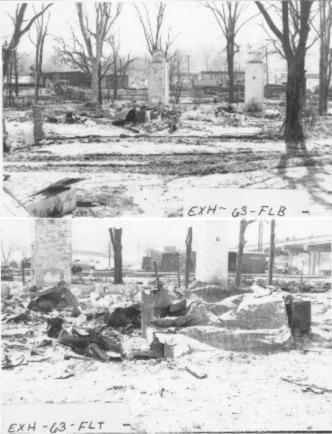 For the next several hours, over 250 emergency vehicles from 39 counties poured into Waverly to assist in putting out the fires and caring for the injured, including teams from as far away as Nashville and Memphis.  TOCD requested air ambulances from Fort Campbell Army Post to transport burn victims to Nashville, and ordered the evacuation radius extended out to 1 mile in case the 2nd tank exploded.  The National Guard Armory in Waverly was opened for use as a shelter.

At about 7:00 PM that evening the fires in downtown Waverly were finally contained, and a short time later all mutual-aid units are sent home.  A total of 16 buildings are totally destroyed, and local officials begin an extensive search of the area for casualties.  The search was called off due to poor visibility, but resumed the next morning at 5:30.

The more seriously injured burn victims are transported to Nashville for initial stabilization, but many are sent to burn centers in Louisville, Birmingham, and Cincinnati later in the day on the 25th.

At 3:15 PM on the 25th, a rail car loaded with paper products re-ignites and bursts into flames, but is quickly put out.  Transfer of the product from the second rail car begins and is completed by 10:30 that evening.  The newly loaded car is taken to Jackson, Tennessee, its original destination.  Evacuated residents are allowed to return to their homes at 8:30 AM on the morning of the 26th, and at 12:00 PM the shelter at the Armory is closed.

A total of 16 people were killed in the Waverly explosion - 6 died instantly, while the remaining 10 died in hospitals over the course of the next several days.

Two other victims (names not available) also died, and another 43 people were hospitalized with injuries of varying degrees.